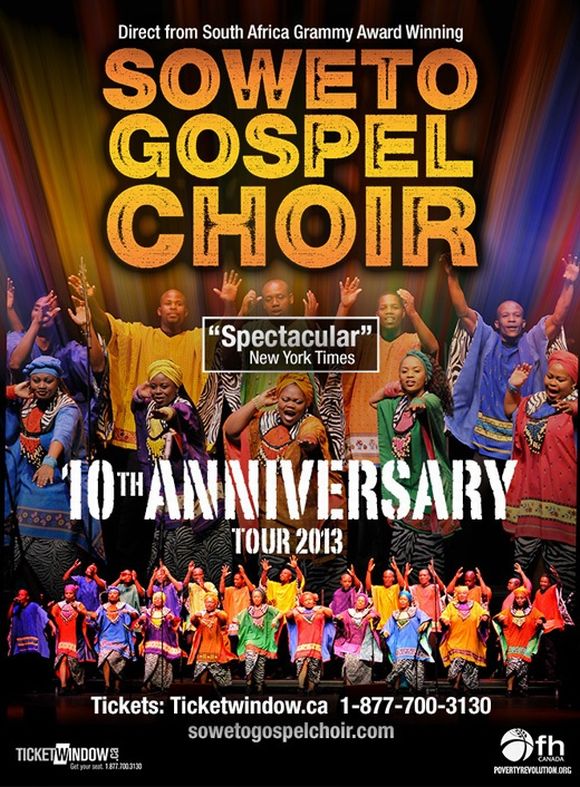 South Africa’s Grammy Award Winning Soweto Gospel Choir returns to Canada, as part of their 10th Anniversary Celebrations. The tour starts on June 15, 2013 in Thunder Bay, Ontario including a performance at the Montreal International Jazz Festival on July 6.

The Soweto Gospel Choir have been uplifting hearts with their voices since 2003. Over the last 10 years Soweto Gospel Choir has brought joy into the lives of audiences all over the world. They have collaborated, recorded and performed with artists including Bono and U2, Aretha Franklin, Stevie Wonder, Robert Plant, Celine Dion, Red Hot Chilli Peppers, Peter Gabriel, Josh Grobin as well as Andre Rieu. They have performed in front of President Bill Clinton, Oprah Winfrey and of course their spiritual fathers, Nelson Mandela and Archbishop Desmond Tutu. Their provocative, spiritual and uplifting voices have placed them on the world stage. The choir holds the honor of being the first South African artists to perform at the Academy Awards as well as the recipients of many awards, including, two Grammy’s, Billboard Music Awards and an Emmy. With all their travels and sold out performances, the Soweto Gospel Choir remain dedicated to their beginnings. In 2003, the Choir adopted the Aids Orphans Foundation, Nkosi’s Haven Vukani. The Choir has raised 1.4 million dollars to date, supporting the foundation’s work with children affected by aids in South Africa. Don’t miss what the world applauds. Spend an evening with the truly engaging spirits and remarkable voices of the Soweto Gospel Choir.