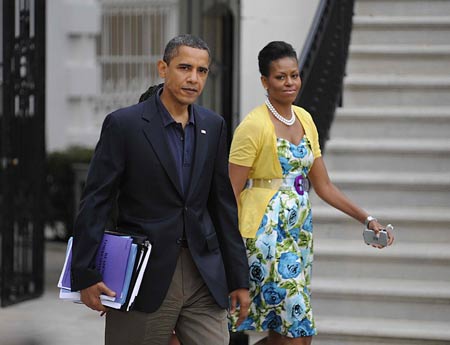 In an interview with AllAfrica’s reporters Charles Cobb, Jr., Reed Kramer and Tamela Hultman at the White House, President Obama discusses why he made the choice to visit Ghana as the 44th USA President and 1st African-American President. Ghana is the first African nation he is visiting since becoming president.

Read excerpts from the interview, watch Part I of the video and click here for Part II.

Q: Development assistance will presumably be an important piece of your Africa policy.  Now, development assistance is pretty fragmented whether you look at the United States or you look at it globally in the sense of varying countries have varying approaches.  And now you, more than any President, are associated with using technological tools, and I can’t help but wonder if you have in mind or have thought about using technology to bring some coherence, if you will, like tracking how aid works or goes and where it goes, et cetera.
THE PRESIDENT:  Look, I think you make a very important point and that is that even just within the U.S. government, our aid policies have been splintered among a variety of agencies, different theories embraced by different people depending on which administration, which party is in power at any given time.  Trying to create something steady and focused on — and always basing our policies on what works and not on some ideological previous position is going to be very important.
And technology can play a very important role in streamlining our aid to countries, making sure that we’re tracking how that aid is being applied, making sure that it’s reaching the people it’s intended to reach.  One of the concerns that I have with our aid policy generally is that western consultants and administrative costs end up gobbling huge percentages of our aid overall.  And it seems to me that what we should be doing is trying to minimize our footprint and maximize the degree to which we’re training people to do for themselves.  So I think using the Internet, using software, using modern technology, to improve delivery systems is important.
Now, I also think on the ground in many of these countries, how we think about not high-tech stuff but low-tech technologies to, for example, improve food production is vitally important.  And I’m still frustrated over the fact that the green revolution that we introduced into India in the ’60s, we haven’t yet introduced into Africa in 2009.  In some countries, you’ve got declining agricultural productivity.  That makes absolutely no sense.  And we don’t need fancy computers to solve those problems; we need tried and true agricultural methods and technologies that are cheap and are efficient, but could have a huge impact in terms of people’s day-to-day well-being.