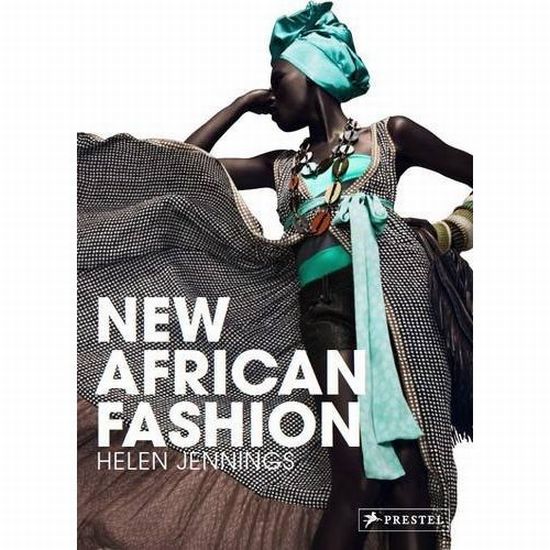 There are a few books that have been written on African style and fashion but none have been as comprehensive and at the same time pan-African as Helen Jennings’ ‘New African Fashion.’ Jennings is caucasian and the current Editor-in-Chief of Arise Magazine. While it could be tempting to easily dismiss Jennings as yet another Westerner trying to tell the world who Africans are, a careful look suggest this would be a mistake.

Showing a healthy respect for Africans, its fashion industry, its fashion professionals and the subject “African fashion,” Jennings immediately builds credibility and rapport with a foreward written by Nigeria’s New York based Ike Ude.

Ude’s foreword establishes that Jennings’ ‘New African Fashion’ is a book that will or should appeal to both fashion historians, intellectuals, the fashion forward and fashionistas alike. Showing a clear command for the language of fashion Ude traces the first known interest in African fashion via way of Picasso and his ‘African moment.’ From Picasso to Yves Saint Laurent to the late Alexander McQueen, Ude effortlessly chronicles the paradigm shift towards a world where African fashion would ultimately find its global footing. With a concluding short paragraph capturing the essence of Jennings’ ‘New African Fashion,’ Ude ushers Jennings’ readers into the ‘New African Fashion,’ a book filled with colorful pages and Africa’s rich modern fashion history.

‘New African Fashion,’ however, initially begins with a narration of African Fashion that is quite stiff and almost anthropological. “African aesthetics have traveled through empires, conflicts, slavery, migration . . .serving as basic protection as well as signifier of status, ambitions, beliefs and ethnic group. . .” reads an excerpt in Jennings’ introduction.However, it is clear Jennings needed to introduce her reader, especially her Western reader, through familiar grounds before taking them on a journey towards the New African Fashion.

As she takes her reader on this explore, Jennings provides insight on the foundation of fashion in Africa. She acknowledges the contributions of the guards/pioneers of fashion in Africa, pays homage to African photographers whose works greatly contributed in helping Africa tells its fashion stories and in a chapter titled “Generation Then,” she outlines the contributions of Africa’s fashion pioneers like Nigeria’s Shade Thomas, Ghana’s Tetteh Adzedu, Niger’s Alphadi among many. From “Generation Then,” Jennings transitions into the “Generation Now.”

Showing she is on the pulse of the “New” African fashion, Jennings cites the impact of fashion in Africa, providing statistics about employment in Africa’s fashion industries. For example, South Africa, according to Jennings, employs 200,000 people in its fashion industry and generates $2.9billion in revenue per annum. The “Generation Now” Jennings explains have also embraced technology and are using technology to spread African fashion, globally. She cites new media platforms like Ladybrille, IFashion, Fashizback and Style House Files, among others. She also cites print magazines like Pop’Africana, Canoe, True Love and Arise Magazine, among many. But, everything is not all good and dandy. Africa’s fashion industries face tremendous challenges. Challenges according to Jennings which includes infrastructure, lack of fashion institutions, lack of continent wide powerful fashion organizations like America’s CFDA to be fierce advocates for Africa’s fashion industries and its professionals, the infiltration and detrimental impact of second hand clothing and Chinese imports, all at the detriment of Africa’s local fashion industries.

The rest of New African Fashion from page 20 onwards to 233, provides brief colorful profiles of Africa’s designers and some of their design collections, models and photographers.

Final Analysis
Overall ‘New African Fashion’ is a good book, especially for the uninitiated in African fashion. For the initiated, it is still a good book to have to serve as a good reference, especially with the short yet informative history of African fashion. For both targeted audiences, it would also make a great gift for your fashion forward and/or fashion obsessed friends and family.