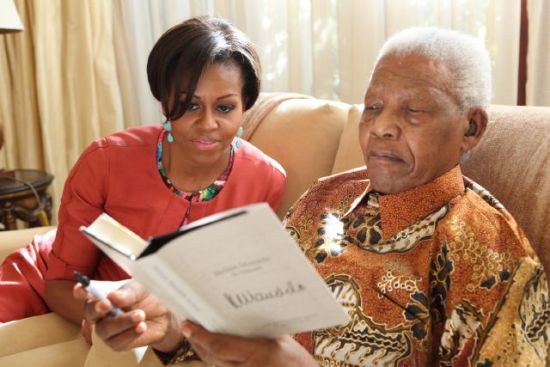 “First lady Michelle Obama met with former South African president Nelson Mandela Tuesday as part of a weeklong visit to the continent, according to a spokeswoman for the first lady.

Accompanying her on her visit with Mandela were her nephew Avery Robinson, 19, and niece, Leslie Robinson, 15, children of Obama’s brother, Craig Robinson, according to Semonti Stephens, deputy communications director for Mrs. Obama.

Obama was expected Tuesday to began visiting other luminaries in the country after arriving in Pretoria Monday night.

Obama, traveling on what officials have said is her second solo official visit to the continent, has brought her daughters Sasha and Malia and her mother in addition to her niece and a nephew.

“The trip is a continuation of Mrs. Obama’s work to engage young people, especially girls and young women, at home and abroad,” the White House said.

The visit will further raise the profile on the continent of the first lady and the president, whom many Africans regard as a favorite son.

“The Obamas as a couple are extremely popular in Africa and obviously 100% well-known there,” Steve Howard, director of African studies at Ohio University, said Tuesday. “Her husband can’t spend that much time there so they are dividing the labor, and she is representing them in South Africa, which is a major media market as well.”