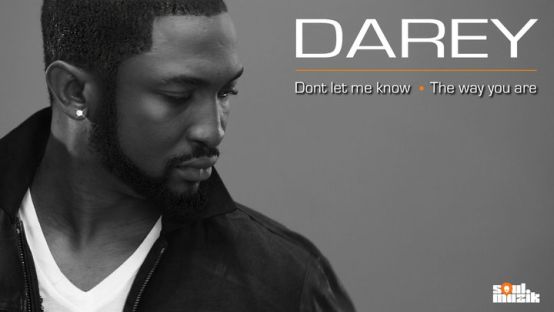 Darey Art Alade is a Nigerian R & B singer who keeps evolving and refining his sound and image. This time, he emerges with an even more sophisticated image and music video we think works. Enjoy ‘The Way You Are’ Music video directed by Mark Hofmeyr and produced by Soul Muzik.

“Multiple award-winning urban R n’ b singer, musician, songwriter, music producer and entrepreneur Darey is not one to depend on the legacy of his late Father; the legendary African Jazz Musician and entertainer Art Alade.

Despite the celebrity status of his late Father in his home Country of Nigeria, things were a bit tough for Darey growing up. Following the loss of his Father at just age twelve, his Mother struggled to take care of the Children by herself. To cope with the loss of his Father and the harsh economic environment he was forced to grow up in, Darey found solace in Music.

He began honing his skills at an early age, singing with several choirs and bands, from the tender age of eight. He has childhood memories of rummaging through his father’s extensive Jazz collection and tagging along with him to his concerts. These early experiences gave him his first taste of ‘showbiz’. By the time he was fifteen, Darey was performing extensively in clubs and venues around Lagos, Ibadan and other cities across Africa. It was during one of those late night sessions he met an executive at Cool FM, a major Radio Station in Nigeria, who appreciated his smooth voice, and his ability to interact with his audience.

As a teenager, he shuttled between Cool FM and the University of Lagos where he obtained a degree in Music. He also studied music theory, singing and classical piano at the Music Society of Nigeria (MUSON). His time at Cool FM presented him the opportunity to acquire advanced knowledge of Radio production and marketing. Having conquered Radio, Darey set his eyes on Television, and soon became a regular on-screen personality in the hit African entertainment variety show; Y’hello.

His big break finally came in 2004, during the first ever African edition of the internationally renowned TV series Project Fame, in which Darey participated as a contestant, emerged third and had the opportunity to perform in front of over one hundred million TV viewers, as well as sign a recording deal with Sony BMG Africa. However the deliverables of that deal were never to see the light of day.

In 2006, he eventually released his debut Album “From Me 2 U” on Storm Records, a top African Record Label. This album got rave reviews and spurned many hit singles. Though he gained millions of fans and admirers across Africa for his participation in the TV reality program project Fame, Darey’s debut album cemented his position as a force in the Nigerian and African music industries. The album won several awards. In addition, the top selling album also included the song, ‘Original Naija’ which was used as the theme song for the first ever edition of Big Brother Nigeria.

In early 2009, he dropped his second album, called “unDAREYted,” on his newly founded Record Label, Soul Muzik. This album produced the biggest R N’ B song in Africa that year titled “Not the Girl.” The album received a plethora of awards and nominations across the World, including the MTV Base award nomination for Best R N’ B Song and Listeners Choice, Channel O awards for Best R N’ B song/video/best male and Nigerian Entertainment Award for best R & B song. Some of the other awards won that year include Hip Hop World Awards Best Male Vocals; Award for Musical Excellence in Nigeria (AMEN), 5 Nigerian Music Video Awards (NMVA), Soundcity Music Video Awards (SMVA), The Audio Visual Awards (TAVA), City People Entertainment Awards and many more.

As part of his promotions strategy for the unDAREYted album, Darey developed, produced and hosted a reality TV show entitled “The most unDAREYted show” which aired as a miniseries across Africa on Soundcity TV. Darey On the show, gave over $10,000 to people he encountered randomly on the streets of Lagos who were given the chance to perform on the spot and be voted for by viewers at home.

The buzz from his second album caught the attention of the African American Music business legend Dick Griffey, who is credited with Discovering and influencing the music careers of artists such as Shalamar, The Whispers, Babyface, L.A. Reid and Dr Dre. Dick Griffey, who offered to Executive Produce Darey’s third album which was to break Darey further into the U.S and international markets, unfortunately passed away before the project could be completed.

In 2010, apart from completing his third studio album release, Darey was busy performing at major shows across the World. The ever touring musician graced stages at sold out events in Kenya and other parts of Africa, including a special concert with R & B powerhouse R Kelly in South Africa and the This Day Peace Concert Tour in the Niger Delta region of Nigeria, which also featured Ciara and 50 Cent. On request of the President of Nigeria, he was invited to perform a special set at the presidential villa in an exclusive dinner to commemorate the Country’s 50th independence Anniversary. At the event, which was broadcast live to over 200 million viewers across the world, he performed a medley of 5o songs with his fifteen piece band, “Soul band” to a room filled with several African Presidents.

With his third album, Darey sets his sights on the UK and global markets. He is releasing two albums in 2011; “Double Dare,” to be released on his Soul Muzik Record label for the African market and an International self titled album “Darey” which will feature production and collaborations from various International producers and artists.

Besides his accomplishments as a recording artist, music producer, TV/Radio personality and master of ceremonies, Darey is also an accomplished businessman and philanthropist with backbone support from Soul Muzik Productions, an event and TV production company, Soul band and a state of the art production facility, Soul Muzik Studios, where he does all his production and recording. As a philanthropist and humanitarian, he has supported several causes close to his heart including Cancer charities, Millennium Development Goals (MDGs) and several foundations in Africa. He also setup the Art Foundation, whose main objective is to keep music education alive for kids in primary and secondary schools in Africa as a way to empower the disenfranchised African Youth.

Despite gaining fortune and fame across the African Continent, Darey is taking his unique blend of R&B to new audiences across the rest of the World, carrying along his crown as the African King of R&B.” ~Bio by Darey