Cameroonian born New York based emerging designer Kibonen Nfi of Kibonen NY is feeling on top of the world as a result of the growing awareness about her designs. On Wednesday, September 22nd, 2016,  Queen of Katwe star Lupita Nyong’o made an appearance on the Ellen Degeneres in one of Kibonen pieces; a supreme wax print spaghetti strap cropped top and palazzo pants.

The actress followed up on Monday, September 26th, 2016, on the Good Morning America show with yet another piece; a blue neoprene fitted midi dress with the signature “toghu” embroidery.

“Lupita Nyong’o did not wear our clothes exactly one year ago,” said the designer on her Facebook page  “I did not give up. Today She has worn two in 5 days.”

The designer who was solicited a year ago by Lupita’s stylist is inspired by traditional Cameroonian garments, West African fabrics and New York’s vibrant fashion scene. She launched her label seven years ago and became quickly known for contemporizing one of the most delicate and intricate hand woven traditional garments of Cameroon western highlands region, the toghu.

For more information about the brand of the pieces Lupita wore, visit  www.kibonenny.com. 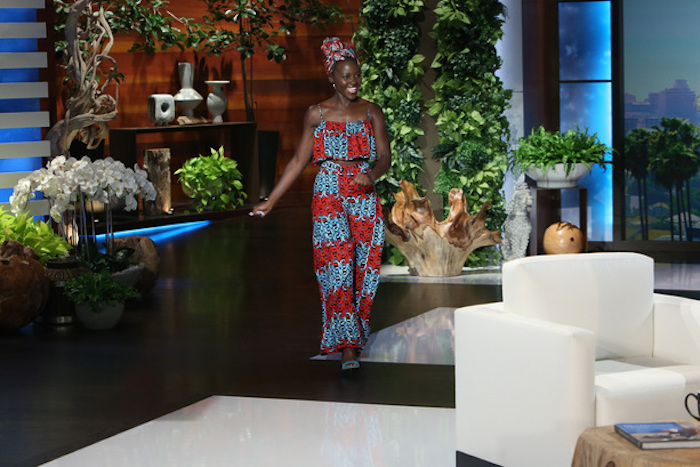