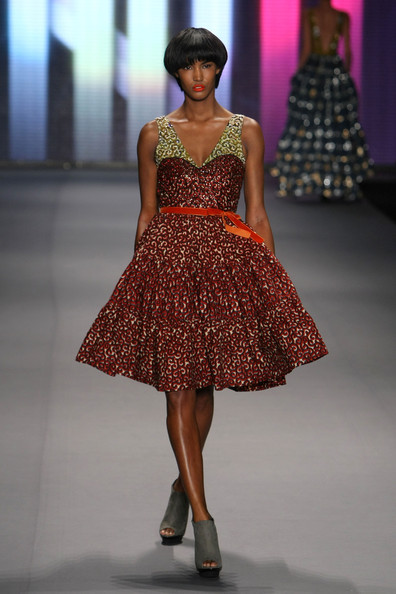 The Arise Promise of Africa Collective had a strong line up of some of the world’s top supermodels. Chanel Iman, Tyson Beckford, Oluchi, Alana, Sessilee, Coco and so many others. Backstage, it was like family as models and production crew warmly greeted each other while makeup artists and stylists enjoyed working on these gorgeous faces. Inside the main room where the show was to be held, “the Promenade” excitement and anticipation was already building up.

Arise had its larger that life current magazine issue with Sessilee gracing the cover as a gift for all seated guests. It also had the presence of celebs like Amerie, Korto, Tinu, Sean Paul, Miss Africa USA Nyasha Zimucha and even Damon Dash managed to squeeze time out of his drama filled life to make a showing. African celebs also came through, Dr. Precious Moloi Motsepe of AFI and Betty Irabor of Genevieve Magazine. The stage was set for an exciting show.

The announcer asked everyone to take their seats, the production crew rolled back the plastic covering on the runway revealing a runway ready for serious struts, DJ Dino Moran, one of South Africa’s finest, began creating some cool beats and all eyes automatically turned to the runway in anticipation of the first model. The backdrop for the runway was Arise’s equally larger than life logo. A circle appeared on the backdrop, expanded,collapsed and ultimately the first designer to hit the runway was shown. It was Jewwl by Lisa.

Jewel by Lisa by Lisa Folawiyo did not disappoint. Inspired by the New York girl who is quirky, modern, fun, fashionable and just loves life, Lisa called her collection “Afro Chic in the City.” “ I love everything about the show Sex in the City,” said Lisa to Ladybrille prior to the show. “Sarah Jessica Parker is my favorite. I love her. The collection is inspired by the show.” The collection was young, vibrant and indeed fun! There were snippy shorts slim leg pants, mini cocktail frocks and leather mix biker jackets (consistent with latest fashion trends ). Lisa used the ankara with her signature embellishments to dazzle fashionistas, buyers and press alike. Our favorites? There were so many! One was the red mustard swirl print cocktail dress with crystal and glass beaded detail worn by Sessilee and the other was a multi-colored circle print beaded long dress.