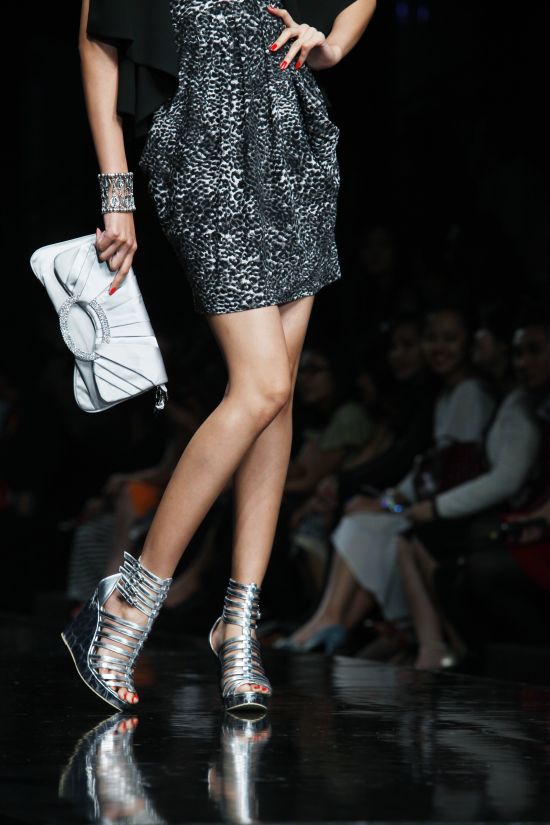 The last two days of Jakarta Fashion Week 2012 were dedicated to institutions that have nurtured the growth of Indonesian fashion. Day five held two Fashion Design Competition (LPM) events. Initiated by Femina Group in 1979, LPM is the first competition of its kind that has consistently managed to filter promising talents and orbit the careers of Indonesia’s top designers. Out of 296 applicants, only 10 finalists were chosen to debut their collection at Jakarta Fashion Week 2012. The third prize winner went to Cynthia Tan from Jakarta whose collection was inspired by the komodo. She incorporated an ikat fabric called ayutopas across muted, pastel tones. The second prize winner was awarded to Friederich Herman from Malang who presented a tailored Ready-To-Wear collection that featured statement jackets. The grand prize winner hails from Jogjakarta. Lulu Lutfi Labibi’s Local Glory collection combined several textiles including Batik, ikat and lurik, which is a type of fabric native to his hometown. His victory won him a scholarship to the Fashion Institute of Design & Merchandising in Los Angeles, USA.

Finally, Jakarta Fashion Week closed with a bang thanks to the roaring success of Dewi Fashion Knights(DFK). Dewi magazine is the first, and largest, high-end fashion and lifestyle magazine in Indonesia. Every year its editors select a group of outstanding designers to present their collection at this prestigious closing event. This year’s line-up includes two of Indonesia’s most prominent designers: Sebastian Gunawan and Sally Koeswanto as well as three relatively new and upcoming names: Sapto Djojokartiko, Auguste Soesastro andof course, Tex Saverio whose dress was worn by pop phenomenon Lady Gaga in the US edition of Harper’s Bazaar following his debut at last year’s DFK. This year’s theme Celebrating Women aims to shift focus back to the fundamentals of design, which essentially is to celebrate a woman’s body.

Auguste Soesastro defines his own couture by focusing on the internal structure of his garments. His collection restu bumi, which literally translates into earth’s blessing is his take on environmentally-conscious design. He uses pineapple fabric among other fine fabrics.

Sapto Djojokartiko is inspired by a traditional Balinese folklore heroine, Calon Arang. He plays with various textures such as sequins, lace and netting to capture the strength of this head-strong feminine figure.
Sally Koeswanto takes on an oriental approach this time around. Meticulous embroideries in the shape of a phoenix make this a stand-out collection.

Sebastian Gunawan who is known for his glamorous, ultra-feminine designs adds an ethnic element to his DFK collection—Garut weave, a traditional craft from West Java. This collection is definitely an exciting departure from his usual work.
Indonesia’s current wonder boy Tex Saverio is interested in exploring the duality of good and evil in The Revelation. Mega dresses made their appearance down the runway before a specially constructed installation that supported his gargantuan finale dress finally appeared at the back of the stage.