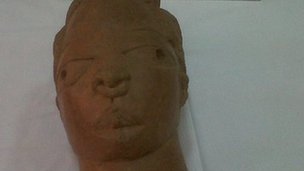 “France has returned to Nigeria five ancient terracotta sculptures smuggled out of the country in 2010.

The artefacts, of Nok origin, were found in the luggage of French citizen at a Paris airport.

Their exact value has not been disclosed, but they are believed to date back more than 3,000 years.

Nigeria’s tourism minister told the BBC it was a “big achievement” in the country’s campaign to recover its lost treasures from around the world.

“I feel extremely delighted,” said Edem Duke, who attended the ceremony to receive the sculptures from French embassy officials in the capital, Abuja.

Over the last 85 years, Nok art has been discovered in a large area of north-central Nigeria from Jos to Kaduna.

Experts say Nok art, which often represents human heads, is the earliest attempt at portraiture yet discovered in Nigeria.

Nigeria’s National Commission for Museums and Monuments believes that items of Nok culture show it was the first society to have used iron in sub-Saharan Africa. . .”