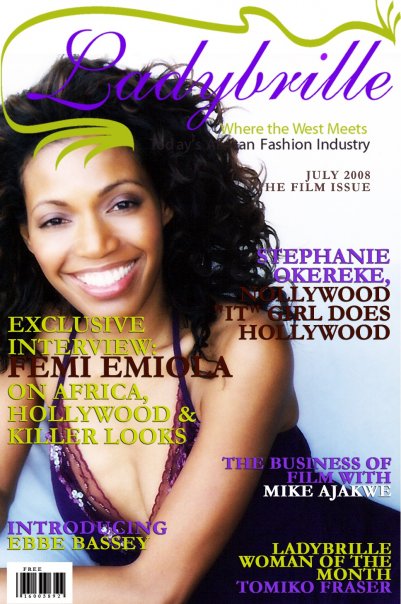 Femi Emiola, Hollywood’s next breakout star, has been seen on major dramas such “ER” and “The Practice.” Born in Iowa to a Filipino mother and Nigerian father, Emiola grew up in the Philippines for five years, Nigeria for ten and has lived in Los Angeles since 2001. Although trained in theatre, a drama queen she is not! This gorgeous actress humbly defines herself first as a daughter, sister, aunt, friend and wife.
Femi Emiola is a symbol of the ever powerful African Diaspora, conveying the flavor of her rich cultural backgrounds on screen, film, television and commercials and beyond. An eternal tomboy, Emiola is a dynamic woman, artfully mastering the complexity of a traditional yet modern femininity.

Her latest role as Bianca in “If Looks Could Kill,” Toyota’s latest campaign to lure affluent African American women, says it all! Her killer looks are dangerous. Yet, what’s most striking about Emiola is her lovable quirkiness [including an obsession with Google and tech gadgets] and her passion for storytelling. What are the next chapters of Femi Emiola’s story? To gain respect of her peers, to have children and to actively serve the global community. Beauty inside and out, this theme resounds throughout her story.

LADYBRILLE.COM: Femi, such a pleasure! You are a woman of many talents!!! Why acting? If you were not an actress, what career would you do?
Emiola: I became an actress because I could not fathom doing anything else. It is an interesting – and sometimes complicated – choice for an African woman, isn’t it? When I was growing up, my father was very insistent on a proper education and a career in medicine or law for me. Acting was definitely NOT his plan for me! Both my parents are PhDs in Chemistry, so I grew up in a very higher-education-oriented household. However, my mother was very understanding about the pull of an artistic life, so she made it clear that as long as I got my Bachelor’s degree, I could do anything I wanted. I have always been drawn to story-telling and books. Growing up in Nigeria, I loved to buy an adventure series by Enid Blyton called “The Famous Five”, or the latest new adventure book. I would act out all the stories all by myself in our front yard. We had three mango trees on our property in Ibadan, so I spent a lot of time in those trees. I had an entire cast of imaginary supporting characters hanging out with me, and when I needed extra help, I had one of my cats step in!

I majored in Journalism and Mass Communications, so I think if I were not an actress, I would still have to be telling stories somehow: writing them, probably. I love children and I’ve written and illustrated one children’s book [not published]. I also love to take photographs that tell a story. Is there a place in the world for a shutter-bug actress who likes to tell stories in many different ways? I really hope so, ‘cos I’m living in that space!: Well, anything that has a great character would be awesome to do, regardless of genre. I had a lot of fun doing “If Looks Could Kill” because Bianca is a great character with an interesting life.

LADYBRILLE.COM: In essence, a sense of adventure and a vivid imagination led you to acting. Are these prerequisites in the types of films you watch or act?
Emiola: I love to watch comedy – it is so hard to do, and the very best comedians are totally brilliant. I also love character-driven independent films, like “Little Miss Sunshine,” “Dirty Pretty Things,” “The Station Agent,” “Waitress” and “Juno.” The Lord of the Rings Trilogy? Absolutely fantastic. They are my all-time favorite movies! I’ve also watched all of the “Harry Potter” films. And good comic book movies with well-written characters and a great story are awesome to watch – so I thoroughly enjoyed “Iron Man.” And you can bet that I’ll be the first in line when “The Hobbit” comes out. It’s the stuff my childhood imagination was filled with, and I love that stuff.

LADYBRILLE.COM: It’s evident that story telling is important to you. Which actors tell stories the best? Tell us your story- about the challenges you have faced in Hollywood?
Emiola: Chiwetel Ejiofor and Jeffrey Wright are a couple of actors who come immediately to mind. The work that they do is emotional and born from deep inside them. And who doesn’t want to work with some of the powerhouses of the acting world, like Meryl Streep and Angela Bassett? I also love Patricia Clarkson – I love watching how subtle and powerful she is.

It can be difficult to go about getting the right training, the right representation, and then doing well in the process of getting work. It’s difficult because really, actors can control nothing but the work that they actually do. Can we MAKE an agent represent us? Not really. Can we MAKE someone give us work? Not really. Choosing this career path guarantees that there will be a lot of heartache, a lot of rejection, a lot of soul-searching and second-guessing of yourself.There is that Hollywood mind-game – are you in or are you out? In the end, all we can really do is be healthy in spirit and in body, and put your energy into the quality of the work that you do. I have been really blessed with a supportive family and a circle of friends that keep me grounded. They are there for me when I lose my way or when I have a victory. I study, and constantly work on my craft. I try not to worry about getting work. It will come, it has a way of doing that. The challenges do exist, but I try to keep it in perspective. I keep my eyes on the prize: Happiness is the ultimate end goal for me

LADYBRILLE.COM: Continual soul searching is imperative to evolve in one’s craft. How do you best get into character and convey the soul of a role?
Emiola: Very good question. Some roles are easier to slip into than others. Obviously, my imagination is a muscle I rely on a lot. If the role is something that is so far away from myself that I can’t even imagine it, it is always a good idea to go to the environment of that character and experience it for a while.

I did a film years ago where the character makes these ballet shoe-like forms out of cloth and water and paste. On my director’s advice, I visited the artist who actually makes this art, and made some real forms with her. It was warm and it was thick, and it was sexy and sad in a visceral sort of way. I ended up using that feeling as the emotional motivation for my character in the whole film. The director, Tanya Steele, won a Directors Guild Award for the film, and rightly deserved it. She taught me very early in my career that I find my characters internally first, by the way they feel about something, themselves, the world around them and the people in their lives.

LADYBRILLE.COM: Describe the essence of a modern African woman, and what attributes would you convey the complexity of such a role?
Emiola: A modern African woman has all the following attributes, among many: Strength. Intelligence. Compassion. Generosity. Beauty. Confidence. . . Love of family. A sense of humor, a big heart and a smile to match. I would look to my African girlfriends right now and think of them if I had to work on such a role. They are all these things and then some. My best friend is Liberian and she inspires me every day.

LADYBRILLE.COM: Tell the world a little secret about Femi Emiola- the modern African woman- you know something quirky, something unexpected?
Emiola: Well, truth-be-told, I’m kind of clumsy and can very easily fall off the floor if it were possible. I’m a tomboy, so wearing high heels is an extremely new experience for me. So you can imagine that shooting “If Looks Could Kill” where my character, Bianca, lives in her 4-inch heels, was very…um…interesting in the balance department. I was running, jumping, beating up bad guys and wearing high heels the whole time. It was a lot of fun, and I have to give credit to Bianca for my new collection of gorgeous high heels. I went out and bought a few 3-inchers after the shoot! LADYBRILLE.COM: Your looks, they kill? What tips would you give to women to attain killer looks?
Emiola: Oh wait a minute now! I don’t think that the title “If Looks Could Kill” applies to me as Bianca! Quite frankly, I think it refers to the beautiful Toyota Camry I drive around in the show. There was a very talented makeup artist on the set making sure I looked good on camera, so you know, I can’t really claim credit for “killer looks”. When I roll out of bed in the morning, I am just grateful my man thinks I’m attractive!

I think every woman has an inherent beauty. So to have killer looks? Be healthy. Be confident in yourself and what you have to offer the world. Hold your head up high. Flash your sense of humor. Maya Angelou’s “Phenomenal Woman” says it all. A woman is the most beautiful than when she’s healthy and happy, and confidence just adds that extra umph!

Stephanie Okereke Wows Audience With Premiere of “Through the Glass”