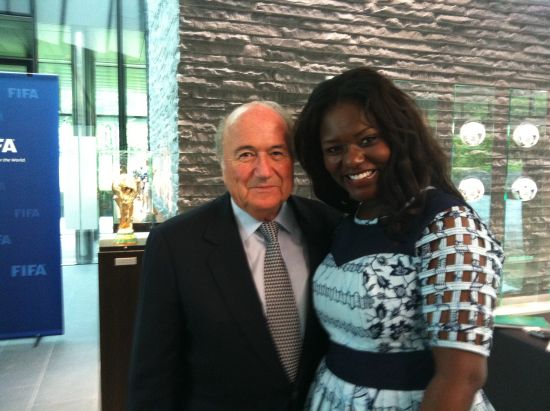 “On Wednesday June 6th, 2012, award winning entrepreneur Dentaa met The President of FIFA, Sepp Blatter for a presentation. The presentation was in aid of Arthur Wharton, the first black professional footballer. Dentaa presented Blatter with a statue which in the coming months will be erected at the home of World football in Zurich. The FIFA president was inspired by the presentation made by Shaun Campbell the founder of the Arthur Wharton Foundation and Dentaa.

“I am thrilled to present this statue. Arthur Wharton was a trailblazer. His ambition has led to many black players being around today. we are seeing the result of his footsteps, a multicultural game now exists thanks to the likes of Arthur Wharton; and football and the world are better because of it, said Dentaa, after the presentation.”

In response to her presentation, twitter lit up on Tuesday when news of the presentation broke with Sepp Blatter tweeting: Joseph S Blatter (@SeppBlatter)
05/06/2012 12:10

Dentaa who is known as the former Manager of Ghanaian football star Asamoah Gyan as well as the founder of the GUBA (Ghana Uk based Achievement) Awards is a huge advocate of the Ghanaian community.

Last year Dentaa was named as a Future Black Leader and was also named on the coveted Blacklist
2011. In May, 2012, Dentaa met President Robert Mugabe in Zimbabwe before attending the testimonial football match for Benjani Mwaruwari. . .”