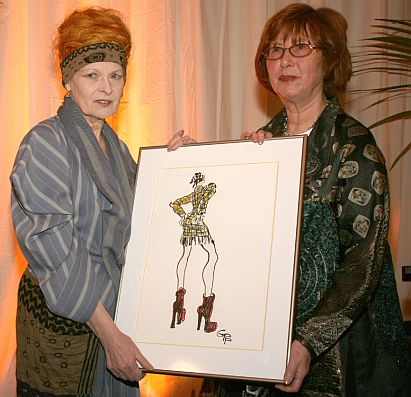 I spent my weekend meeting and interviewing Famed British Designer Dame Vivienne Westwood. She was honored at the San Francisco Academy of Art University. In attendance was also famed British designer Zandra Rhoades.

Westwood was witty, funny, gutsy and very down to heart. Westwood is credited for heralding the punk movement as early as the 50s and definitely in the 70s. By the 90s, Westwood had redefined her style. She maintained her avant garde edge but presented it in a sexy, refined and modernistic reconstruction of historic fashions such as corsets and crinolines; infusing what would be her signature style of British fabrics such as tweeds and tartans. From disheveled, extreme and rebellious looks that was synonymous with her socio-political stance, Westwood has transitioned to womanly yet non-conformist elegance.

The Academy’s students through laughters and numerous questions to Westwood in later Q &A session showed they were delighted to hear her and her politically incorrect views on current fashions.“We are all being trained to be consumers. There is no choice at all. The dream of the business person is to sell one product forever and ever. [The] [result] is everyone looks so horrible, miserable, bored [and] stuffy,” lamented Westwood as to the current state of fashion and her determination to give women a viewpoint that goes “against the consumer” mentality with her designs.

The fact that Westwood was in San Francisco spending her time with students got me thinking about education and training for Africa’s future fashion professionals.Although it is changing, albeit slowly, fashion is not exactly a career a young African is encouraged to embark on. Instead, degrees like law, medicine and engineering take an elite status with fashion maintaining the back of the bus seat. However, a part of that perceived myopic view on fashion has to do with the lack of training and education for Africa’s future fashion professionals. In North America and Europe, students enjoy strong caliber fashion schools and are constantly exposed to key industry persons from designers to fashion moguls.

Fashion is BIG business. As such, students are taught and exposed to the very best in the industry. In Africa, South Africa’s Fashion Industry as well as the design house of African Mosaique consisting of a few seasoned designers from mostly East Africa seem to the the few ones pushing a major training of future fashion professionals. I want to see and I encourage more African fashion industry professionals to take aspiring African fashion youths under their wings and train them.

Train them on Africa’s fashion history, textiles,business, photography, journalism, interior design,marketing, public relations, protection of intellectual rights, e-commerce and internet use, fabric maufacturing and more. There is a problem when Chinese goods in Africa account for over 70% and American second hand clothing from charities like Salvation Army is big business, partly because Africa’s poor cannot afford the cost of being clothed in thier own fabrics.

If a formal education is not available, students/youths should seek informal training in design houses in Africa and mentors who know and understand the business of fashion. Africa needs fashion education and entrepreneurial skills. The women who sell fabrics at the markets are just as important as the weavers in the villages. Mobilizing these groups of women and teaching them the business of fashion, is very important to improve and sustain an existing industry. Form organizations for there is power in numbers, develop fashion schools, lobby governmental entities such as The Ministry of Trade/Textile development to become actively involved in creating infrastructure, privatizing textile firms and more to help create a more independent continent. Raw materials to make clothes for Africans within Africa, the West or the East should come from Africa’s textile mills or the local men and women who produce this, not imported from overseas into Africa.

Designers in Africa that are considered the Crème de la Crème in Africa’s fashion industry need to really keep social responsibility at the forefront of their creative brains. Be the mentors, the role models and the advocate of change for fashions schools and competitive curriculums. What good is it if you are the only top designer and the rest of your country lacks even a basic working fashion industry? Some selflessness is required to get Africa’s fashion industry ahead. In addition, designers, fashion schools and other industry professionals in the USA and Europe should consider some sort of pro bono work where they give hours of training, through technological mediums or other avenues, to train and teach fashion and the business of fashion to the future generations of Africa’s brilliant fashion minds.
~by Uduak Oduok