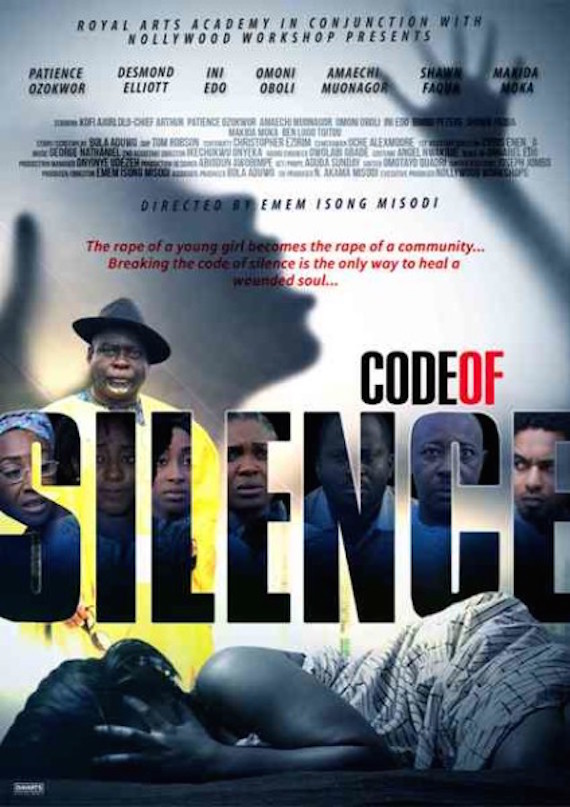 ‘The rape of a young girl becomes the rape of a community. Breaking the Code of Silence is the only way to heal a wounded soul’.

Royal Arts Academy in conjunction with Nollywood Workshop presents the release of a new block buster movie, titled ‘Code of Silence’ which is a gritty tale of a young girl, Adanma who was gang-raped by two men one night while coming home from school. This singular act is the catalyst that triggers a number of catastrophic events in the film; One of the rapists is a prominent politician in the state and the other his aide.   As a result, Adanma’s family being of humble origins, are afraid to report the matter to the relevant authorities citing the excuse that rape is considered a taboo in society and it will make her undesirable for marriage. This very relevant film explores the very important themes of gender violence, as well as family planning and other health messages through various characters in the story.

The movie stars an array of talented, award-winning actors such as Ini Edo, Patience Ozorkwor, Desmond Elliot. Omoni Oboli, Kofi Adjorlolo, Amaechi Muonagor, Shawn Faqua, Makida Moka etc to name a few. ‘Code of Silence’ was produced and directed by Emem Isong. Assistant Director was Chris Eneaji. Story and original screenplay was by Bola Aduwo, who was also Associate Producer on the project.  Additional screenplay was by Kehinde Joseph.

“Code Of Silence” is a gripping, heart-rending emotional story inspired by true events that needs to be told.  The rape statistics in Africa are staggering and this film will take you on thought-provoking journey that will keep you glued to the edge of your seat from start to finish.

Watch Trailer & Click through on video clip to watch online