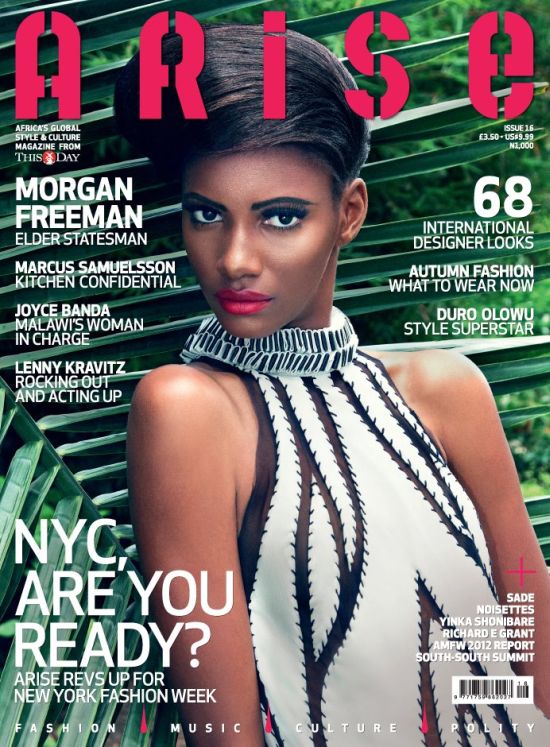 CNN shines the spotlight on African fashion with a series of features on Africa’s fashion industry influencers, designers, media and production houses on the continent. One of its recent features is a flattering equation that essentially equates Arise Magazine to Vogue. Vogue Magazine is known as ‘The Fashion Bible.’ CNN now calls Arise Magazine ‘Africa’s Fashion Bible.’ Arise Magazine is well written and of high production quality. It is distributed worldwide and does have a consistency, since it first emerged on the scene. That coupled with its fashion shows that provide the financial backing and platform for African designers should be highly commended and also makes it fitting to call the publication, although arguably, “Africa’s Fashion Bible.”

See an excerpt to the recent article below.

(CNN) — In the heart of London, one of the style capitals of the world, African fashion has found its new home.

Based in the UK capital’s bustling center, Arise calls itself Africa’s first and foremost global style and culture magazine. The bimonthly publication, which has so far been printed 16 issues, first hit the newsstands in 2009 and is now sold in 26 countries across the world.

Its illustrious pages are striking a chord with what the magazine calls Afropolitans — a new generation of young and urban “Africans of the world” who breathe fashion and are fascinated by arts and culture.

Penny McDonald, international managing director at Arise, says there was a gap in the market for a quality offering that would showcase the wide-ranging talents of African designers while breaking stereotypes about the continent’s culture.

“There were lovely designers out there who never got a look into the traditional markets and the traditional outlets,” she says. “We want to show the other side of the vast continent and that’s what this does.”

The large-format magazine, which was initially published every four months, was determined to be competitive amongst other fashion heavy-hitters right from the start. For its first cover back in 2009 it landed some of the fashion world’s most glistering stars, including supermodels Alek Wek and Liya Kebede. Since then, a wide array of African and international icons, including Charlize Theron, Alicia Keys and Denzel Washington, have all been featured in Arise.

According to McDonald, convincing readers and advertisers about the magazine’s quality was the biggest challenge at the beginning.

“A lot of people in the past thought ‘oh, another black publication, oh God, I’ve seen it all before, it’s full of hair and make-up.’ And then they suddenly sat back and realized ‘my God, actually the content is pretty solid.’

Our aim is to create an international audience and platform for the best African fashion talent.
Helen Jennings, Arise editor

“We have phenomenal journalists, phenomenal models and now they do want to participate. The brands are following us and that journey has been very slow, but the brands are there. The hardest battle of keeping a publication like this alive is to get the commercial viability working and that’s what we do and we push everyday to find sponsors, advertisers, just everyone to support us.”

But apart from highlighting African style and culture through its pages, Arise is also bringing the continent’s fashion to catwalks across the world — over the last few years the magazine has held a series of international fashion events, helping established designers and inspiring young talents to showcase their creations. . .”

#OccupyNigeria: Open Letter to My Pastor: What Would the Prophets Do?