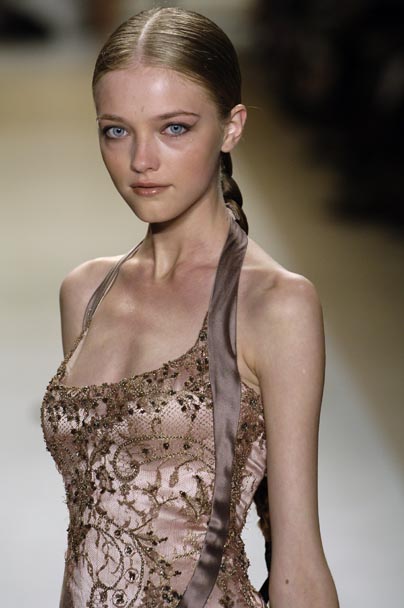 The debate over the “super-skinny” model has been so hot it’s reached a boiling point. As of this week, Africa, particularly South Africa, jumped on the bandwagon by banning “super-skinny,” girls from modeling. Now why did they have to do that? “You are not happy about the ban?” you ask. Yes and no. Yes because it’s about time the interests’ of models are protected in the workplace. From an employment/labor law angle, arguably, it is also an unsafe and harzardous work enviroment when models are encouraged or forced to drive themselves to starvation to get income to sustain themselves. But, I am not happy because I am concerned the African model will be more jinxed/shafted than she already is. For an extensive discussion of what I mean, click here.

It fascinates me the constant redefinition of beauty. In the ’20s, the fashion industry as a whole {Europe and America} embraced curves. Curves were the “in” thing till the ’50s. Remember the glam ’50s? By the ’60s, the world was on some head trippin’ drug that seemed to cause madness. In the midst of the madness, the pendulum swung to the seemingly super skinny stick look of Twiggy with her attractive bulging eyes. The twigs ruled and were the “in” babes.

By the’80s and 90s, curvilicious models like Naomi Campbell, Linda Evangelista and Cindy Crawford kicked the twigs to the curb. The trio dominated with their larger than life personalities. But, wow, did they have attitude!The well known “divas” were what a lot called “bitchy” as they allegedly insisted they would not “get out of bed for anything less than $10,000” a day. “Oh yeah?” said the designers. “Let’s see who wins this tug of war.” The end result was a revolt to the heroine addicted super skinny stick look of Kate Moss. The designers won but was it really victory? Well, no one cared or thought about hostile or hazardous working environments for models via employment/labor law violations, anorexia and potentially what I call fashion criminal behaviors like “aiding and abeting” the death of super skinny models.

Fast forward to 2007 and all of a sudden the industry grows a conscience. Great. But, does the whole ecofriendly fashion consumerism trend have anything to do with it? Anyway, recently, Spain aka Latin hotness couldn’t deal with the stick look anymore. “What is this Oshi?” says Spain.” Get the curvilicious girls back. As a matter of fact, ban any incoming twigs and while you are at it, chase dem skinny stiffed faced girls off our runways! We love dem meat on dem bones.” Of course our African “brodas” said, “Amen to dat!” But heyyyyyy, hold up! Before you threaten to feed the “fashion faux pas” to the hungry models a la the Devil Wears Prada, or throw big fat sticks of chicken breast at them, the super skinny African model just barely got on the scene! In case you forgot what the discovery channel and mainstream media have said and shown for ages, Africa has lots of hungry people. So, the last thing a so called “super-skinny” African model wants to do is come to the USA/or Europe or stay in Africa and not eat. She’s eating! She’s been hungry for decades, right? Spain, Brazil, USA, London, South Africa *sigh* you can’t be serious? She’s only been holding it down for like nine [9] years, consistently. The long legged ribs showing African “super-skinny” model is the real deal. She is ALL natural and with a high metabolic rate, probably eats every other minute. Spain and the rest of you heavy hitters, why did you have to go and “jinx” her with the whole pull the plug on ALL “super skinny” models? Don’t doom the “super-skinny” African model before she gets to strut her “super-skinny” self on the runway, please.