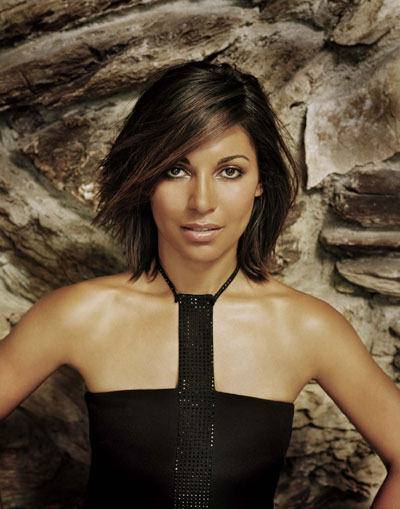 Born in Chicago on November 23, 1967, Salli Richardson-Whitfield burst onto the silver screen in 1993 in ‘Posse, an African-American Western directed by and co-starring Mario Van Peebles. Her resume’ reveals extensive work since then in television, film and theater.

Salli starred opposite both Denzel Washington and Will Smith, playing their wives in the films “Antwone Fisher” and “I Am Legend,” respectively. And she happily juggles such big studio assignments with interesting independent features like “Black Dynamite,” “Pastor Brown” and “We the Party.”

On TV, she currently portrays Dr. Allison Blake on the SyFy Network’s hit series “Eureka,” for which she was nominated for an NAACP Image Award. Her other television credits include a starring role as attorney Viveca Foster on “Family Law “and recurring roles on “CSI: Miami”, “Rude Awakening” and “NYPD Blue.” In addition, she guest-starred on the critically acclaimed series, “House,” and voiced the character of Elise for the animated series “Gargoyles.”

Salli resides in Los Angeles with her husband, actor Dondre Whitfield, and their two children, Parker and Dre. Here, she talks about her new film, “I Will Follow,” an ensemble drama directed by Ava DuVernay.

LADYBRILLEmag.com: Hi Salli, thanks for the time.
Salli Richardson-Whitfield: Hi Kam. Happy to be here.

LADYBRILLEMAG.COM:I’ll be mixing in my questions with some sent in by fans. Children’s book author Irene Smalls asks: Why this film? What attracted you to the script?
SRW: Well, you don’t pass up roles that give you the opportunity to stretch and to grow. For black actresses in Hollywood, these kinds of parts are few and far between. Our writer/director, Ava DuVernay, did a beautiful job of creating a multi-dimensional character that shows a black woman at a crossroads and how she keeps her balance when the unexpected happens in life. The film explores love, loss, loyalty and life in general. I couldn’t pass it up, even though it scared me a little. I wondered, “Could I do this?” I’m glad I stepped in and tried. I’m very proud of what we made with this film.

LADYBRILLEMAG.COM: Harriet Pakula Teweles says: A ‘surprising thirst for life’ that follows after the death of a loved one seems so different from the reports of depression and loss of interest in life that so many people experience. How does “I Will Follow” reconcile this?
SRW: ”I Will Follow” is a celebration of life. Sometimes when you lose something, you understand its value more than when you had it. The same is true for life. When a loved one passes, there are mixed emotions and a thirst to live one’s own life more deeply can certainly be among them.

LADYBRILLEMAG.COM:How did you prepare for the role of Maye?
SRW: It was tough. From the time I first met Ava, the director, to the first day of shooting was only a week, if that. It was a very fast, very creative, very organic process. My manager pushed me to dive in with both feet. The director knew what she wanted. And with the encouragement and the support of both, I decided I was going to give it my all – and I did.

LADYBRILLEMAG.COM:What would you say is the film’s message?
SRW: I hope people come see “I Will Follow” when it opens on March 11 and find their own lesson in the film. It will speak to everyone differently. That’s the power and the magic of film.

LADYBRILLEMAG.COM:What was it like working with Ava DuVernay as a director?
SRW: She is wonderful. Very focused. Like I said, she knows what she wants. Every director, believe it or not, does not have a clear vision. And without a clear vision, the captain can’t steer the ship. She guided the ship smoothly. She was kind and patient and encouraging, but very clear on where we were all going. She was also very open to ideas. She certainly didn’t seem like a first-time narrative director. She has a bright future.

LADYBRILLEMAG.COM:What challenges did you face in shooting a full-length feature film in just 15 days?
SRW: Indies are always an extra challenge. The time is shorter because you have less money to spend and fewer days to shoot. But our set on “I Will Follow” was very harmonious and very familial. The feeling we created together offset the lack of a big budget. So yes, there were challenges, but they only brought everyone closer together, which I think you can see from the final product.

LADYBRILLEMAG.COM:Attorney Bernatte Beekman asks: What role did the African-American Film Festival Releasing Movement (AFFRM) and its grassroots distribution play in your decision to participate in the project? Would you like to produce, direct?
SRW: I didn’t know about AFFRM before I made the film. I learned about it after. I think it’s brilliant and much needed. AFFRM is a new way to distribute black movies – not just for our film, but for other quality black indie films. They’ve gathered the nation’s finest black film organizations together to release a first-run film simultaneously in theaters nationwide. AFFRM’s “I Will Follow” is the first grassroots national theatrical release powered completely by community organizations. It’s a game changer, and I’m proud to be involved somehow.

As far as directing, yes! I am directing already. I helmed an episode of my show “Eureka” that will air this coming season and I’ll be doing another next season. I love it and plan to direct much more.

LADYBRILLEMAG.COM:Larry Greenberg would like to know what the difference is between working on a TV series like “Eureka” and a serious film like “I Will Follow.”
SRW: “Eureka” is a blast. “I Will Follow” fed my soul. Both are necessary and positive. I’m fortunate to have had the opportunity to work in both worlds.

LADYBRILLEMAG.COM:Is there any question no one ever asks you, that you wish someone would?
SRW: That’s a good one! Gosh, I wish I had one. I feel like I’ve been asked just about everything over my career at some point or another. But that’s a very good question.

LADYBRILLEMAG.COM:The Tasha Smith question: Are you ever afraid?
SRW: Yes. We all get scared. But that’s the time to be brave, push on, strive for your goals and push past what scares us.

LADYBRILLEMAG.COM:The Columbus Short question: Are you happy?
SRW: Yes! My husband, Dondre, and my two children make me incredibly, incredibly happy. Plus, I get to go to work doing a job that I love. I’m very happy and grateful.

LADYBRILLEMAG.COM:The Teri Emerson question: When was the last time you had a good laugh?
SRW: I was just on The Steve Harvey Show and on The Monique Show doing press for “I Will Follow,” and they both had me in stitches.

LADYBRILLEMAG.COM:What is your guiltiest pleasure?
SRW: I have one cheat day every Saturday. And on that day, I’ve been known to settle down with a whole pizza! Guilty pleasure, indeed. But then I’m back to being good on Sunday!

LADYBRILLEMAG.COM:Thanks again for the time, Salli, and best of luck with the I Will Follow.
SRW: Thank you, Kam! I hope folks come out and support this lovely black film starring myself, Blair Underwood, Omari Hardwick and Beverly Todd. We need everyone’s support to make it a success!